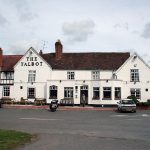 The Talbot – Knightwick
Everyone talks about Farmers’ Markets as though they have always been about. In fact the movement is barely twenty years old and the Teme Valley Marketwas one of the originals.
It was opened in October 1998 at The Talbot with four stalls in what was the ballroom. There are now about thirty stalls at
the front of The Talbot come hail or shine. (In 2001 it had to close for three months for Foot & Mouth and one month had to migrate to Ankerdine Barn because of floods)

The whole idea was for people making good quality things locally to be able to sell their produce to local people. This was The Teme Valley Market’s founding principle. It is one of the few markets run by its stall holders, we put up and take down the marquee and organise our own activities and publicity, so consequently overheads are kept to a minimum.

We are enthusiastic and forward looking and feel we are doing our bit to promote ‘authentic’ local markets selling local food and products and we were recently named as one of the top ten Farmers Markets in England by the Independent Newspaper.

To keep our connection with the land we hold a Plough Blessing service at the January market and a Harvest Thanksgiving at the October market (both short!)

In the past we have taken our market to Italy – Salonè del Gusto held in Turin in October 2000, Abergavenny Food Fair 2003, Royal Show at Stoneleigh 2004 under the patronage of DEFRA and have had a large stand at the Ludlow Food Fair every year since 2000.